"I'd be a lot more impressed if they flew a couple of Tupolev 160s against NORAD's air defences. Those ancient Bears would have no chance in a modern combat environment, whom do the Russians think they're kidding?"

How about this one?

Supersonic Soviet era bomber. ON PAPER having an awesome capability but rather disappointing in real-world performance? Nonetheless under the right circumstances an effective warplane? 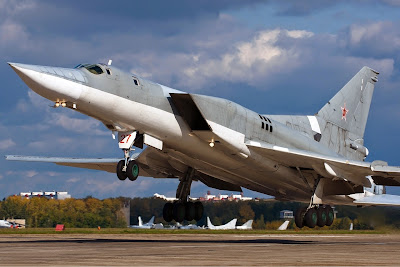 This warplane called "Man-eater" among Russian aviators. So many crashes?

According to the deagel Internet web site about thirty refurbished and improved versions of the Backfire to be in Russian operational service by 2020.

"Description: The Tupolev Tu-22M3, Backfire-C NATO-codename, is a swing-wing, medium range bomber designed to strike targets in Western Europe and Asia using both nuclear and conventional weapons. It has been designed to penetrate enemy air defense at low altitude and supersonic speed making him more survivable than previous strike aircraft."

"The nuclear-capable Tu-22M3 bomber features in-flight refueling capability for extended range missions which has been assumed as a capability for long range strikes against the United States of America."

"The Tu-22M3M, Backfire-D NATO designation?, is an advanced upgraded version of the Tu-22M3 bomber fitted with a wider array of more sophisticated weapons. As of early 2012, the Russian Air Force plans call for upgrading up to 30 Tu-22M3 aircraft to the Tu-22M3M standard by 2020 . . . The upgraded bomber externally remains the same but it is fitted with advanced avionics, sensors and targeting systems to carry out both tactical and strategic attack missions."