Bai'at it is called. Allegiance and fealty as pledged. First Abu Sayyaf and not also the Indonesian Abu Bakr has taken notice of ISIL. Thanks to Robert for the tip.

"Abu Bakar Bashir Abu Bakar Ba’asyir, or Bashir, is the spiritual leader of the jihad terror group Jamaah Islamiyah, and consequently retains considerable influence among Indonesian jihadists. He is the first jihad leader of any significant prominence to jump on the Islamic State bandwagon" 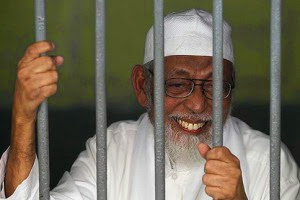 Abu Bakr locked in prison as we speak. When Abu Bakr speaks, his followers listen.
"Imprisoned terrorist convict Abu Bakar Ba’asyir has officially pledged his allegiance, or bai’at, to join the jihadist movement of a militant group known as the Islamic State of Iraq and Syria, or ISIS"

That temptation to jump on the "bandwagon" is very strong. Many cannot resist. That number more than we might like to think. Everybody likes a winner, nobody likes a loser.