Read of this recent confrontation from several weeks ago now. American RC-135 reconnaissance and intelligence gathering aircraft having a close encounter with a Russian warplane on an intercept course. Thanks to intelNews.org.

"An American spy plane was forced to enter Swedish airspace without permission in order to avoid a potentially serious encounter with a Russian military jet, which tried to intercept it in international airspace. Swedish news agency Svenska Dagbladet said on Monday that the incident happened on July 18, one day after Malaysia Airlines Flight 17 was shot down over Ukraine" 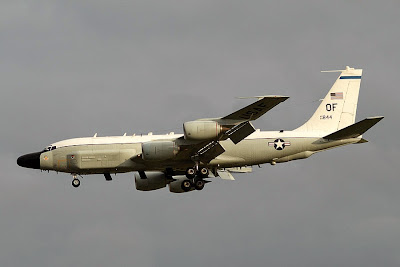 A RC-135 on approach to landing. A jet aircraft based on the old and venerable Boeing 707 commercial design. Reputed to be able to provide near real-time surveillance of a scene.

That Il-20 "Coot" and the American RC-135 roughly equivalent having similar missions and capability!

That particular date of the "encounter" very significant. Aggressive counter-intelligence beyond normal usually and indication of someone trying to HIDE something!! That American pilot evidently felt he was in danger and took severe and unusual evasive action, including unauthorized intrusion of Swedish airspace. That must have been a tense situation.