Those lands bordering the very eastern coast of the Mediterranean Sea to include the modern nations of Syria, Lebanon, Israel. The Levant.

"Bilad al-Sham . . . was a Rashidun, Umayyad and later Abbasid Caliphate province in the region of Syria. It incorporated former Byzantine territories of the Diocese of the East, organized soon after the Muslim conquest of Syria in the mid-7th century" 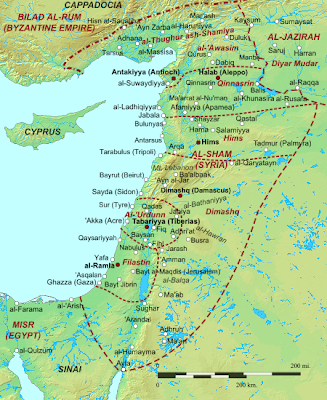 Al-Sham during that time of the earliest Islamic rule. Borders as drawn at the time NOT even corresponding to the demarcations of the modern countries in the area.

"The term etymologically means 'land of the left hand', referring to the fact that for someone in the Hejaz facing east, north is to the left"

Those first lands as conquered by the Islamic warriors in the aftermath of the death of Mohammad. Al-Sham. Reputed to be the BEST land according to Mohammad himself.

The Hejaz of course that coastal territory of the Arabian Peninsula bordering the Red Sea.

Understand and appreciate that the modern nations of Lebanon, Syria, Iraq, Israel and Jordan in considerable measure creations of the European imperial powers of Britain and France. That Middle East subsequent to the end of the Great War [WW1] divided and areas of mandated rule agreed upon by the Sykes-Picot Agreement. The local people for the most part not even consulted, THOSE COMBATANTS OF ISIL WANTING TO RESTORE ISLAMIC RULE TO THOSE VARIOUS LANDS OF THE EASTERN COAST OF THE MEDITERRANEAN AS IT WAS DURING THE FIRST THREE GENERATIONS OF ISLAM [SALAFI]!!