"'perhaps the worst army that has ever marched to war' - 'unpaid, untrained, undisciplined, its soldiers having more in common with their enemies than with their officers.'" - - W. Churchill.

Before there was ISIL THERE WAS THE DERVISH!

At least for a period of over one hundred years you cannot find an example of an irregular military force having enjoyed such success as has ISIL.

That only prior example of irregulars defeating a conventional military force and doing so in such a complete and irrevocable manner, almost leisurely so, being the obliteration of the "Anglo-Egyptian" army under the command of Hicks Pasha at El Obeid.

"Anglo-Egyptian" only in the sense of having English officers commanding Egyptian troops. 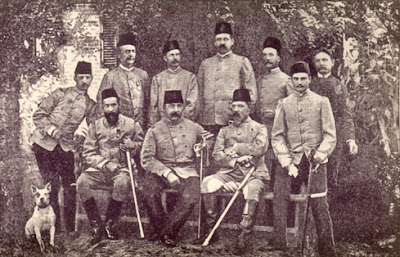 Here is Hicks Pasha and his battle staff. Hicks is in the front row, second from the right.

"The Battle of El Obeid was fought between Anglo-Egyptian forces under the command of Hicks Pasha and forces of Mohammed Ahmed, the self-proclaimed Mahdi, on a plain near the town of El Obeid on November 3–5, 1883."

That entire force under the command of Hicks Pasha destroyed to the last man, WHAT WAS CALLED THE "KORDOFAN EXPEDITION" NOT lacking in firepower.

"The Kordofan expedition was made up of about 8,000 Egyptian regulars, 1,000 bashi-bazouk cavalry, 100 tribal irregulars, and 2,000 camp followers. They carried supplies for 50 days on an immense baggage train consisting of 5,000 camels. The army also carried some ten mountain guns, four Krupp field guns, and six Nordenfeldt machine guns."

"These Sheikhs are a peculiar institution in the Soudan; they are supposed to be men under the special protection of a particular angel of God, whose interposition is effected by the Sheikh having isolated himself for eight or nine hours daily during a term of years, and constantly repeating all that time one of the ninety-nine names of God. After a period, as described when writing about the howling dervishes, the individual in question declares himself invested with the power of the angel, and it is supposed that he has received some occult intimation to the effect that God has ordered this angel to be his faithful slave, and to obey all his wishes"

That Dervish irregular army under the command of the Mahdi so very similar to the modern-day ISIL, mind, body, spirit!