Those two Americans recently killed in Syria while fighting with ISIL merely the proverbial tip of the iceberg?

"The U.S. government is tracking and gathering intelligence on as many as 300 Americans who are fighting side by side with the Islamic State group in Iraq and Syria and are poised to become a major threat to the homeland, according to senior U.S. officials." 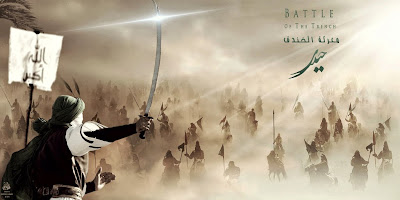 Very nice image, a portrayal of the Battle of the Trench from the days of Mohammad. The Salafist combatants of ISIL seem themselves in the same manner, idealistic fighters for Islam. That might actually be Mohammad holding the sword in his right hand. Since the face is not shown, this image of Mohammad is acceptable to the Muslim?

ISIL if and when they consolidate power will dispatch these "motivated and idealistic" young men on terrorist missions far afield. To America for instance?

This is the fear!!