"'Karma is a bitch'. That entire American Civil War can be seen as karma coming back to bite you and big time."

"About 600,000 black African slaves over a period of 200 years were transported from Africa to what became the United States."

"During that period of the American Civil War about 700,000 soldiers died, both sides combined, that war from the perspective of most the central issue was slavery."

"Bill paid in full? I am sure others will disagree." 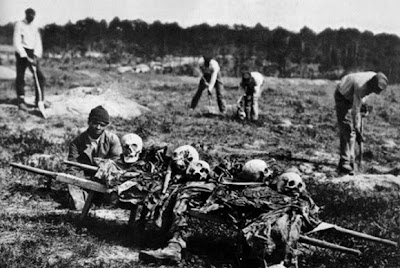 Union casualties the remains of which are policed from the battlefield of Cold Harbor by freedmen. Men born as slaves now freed and employed in the task of collecting and burying Yankee dead. That frontal assault at Cold Harbor across open ground resulting in 10,000 Federal dead and wounded within a period of ten minutes!! One can suggest the task of the freedmen can be deemed most ironic?

One picture worth ten thousand words! I am sure!