For a fact I have seen this picture too and did believe what was purported to be shown.

Czechoslovakian woman in despair, forced to give the fascist salute to marching German troops during the occupation of the Sudetenland, 1938. But we need to know the rest of the story. And I am sure the controversy regarding this matter will no go away easily. 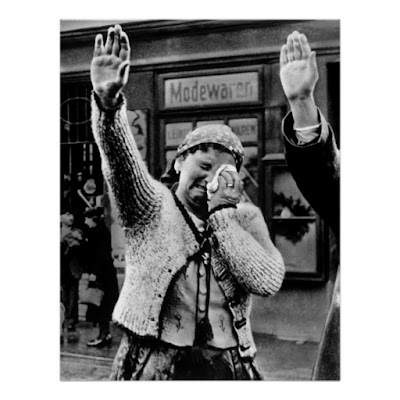 "The tragedy of this Sudeten woman, unable to conceal her misery as she dutifully salutes the triumphant Hitler, is the tragedy of the silent millions who have been `won over' to Hitlerism by the `everlasting use' of ruthless force." - - Caption from the American National Archives 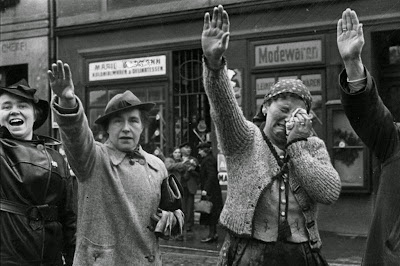 "The 'sad woman' was cut and edited out of context so that you wouldn't see the whole picture. Evidently the more sensitive type, she is crying TEARS OF JOY!"

That woman crying evidently an ethnic Sudetenland German. She and the other women not forced or coerced in any manner. The woman seen as distraught actually quite happy with the situation.

One picture worth ten thousand words? When juxtaposed these two images not worth merely twenty thousand words but much more than that.

Anyone have a trouble with the analysis? Let me hear from you.