In light of the situation in Iraq, ISIL having routed the Iraqi military in an almost leisurely manner, does this surprise.

5,000 [some other sources suggest 4,000] Hellfire missiles being sold to Baghdad.

This is reinforcing failure?

"WASHINGTON — The US State Department has approved two new lots of weapon sales to Iraq at a time when that government is desperately trying to fight off the encroachment of the militant Sunni Islamic State."

"The larger agreement would procure 5,000 AGM-114K/N/R Hellfire missiles for the Iraqi military .In January, Iraq sought to procure 500 of the weapons, which can be equipped on a number of platforms, including the Iraqi Air Force’s AC-208 Cessna Caravan." 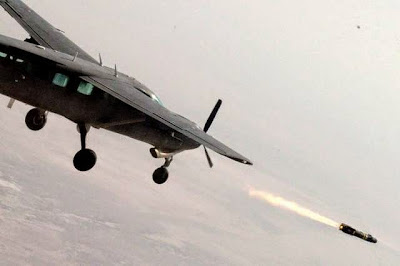 Here is an image of an Iraqi AC-208 firing a Hellfire.
That AC-208 a combat warplane I was not even aware of. And can fire Hellfire.

Hellfire normally fired from a drone or an Apache helicopter gunship. Iraq does not possess these weapon systems to my knowledge.

And this too is a desperation measure. The IRAQI ALREADY HAD IN THEIR INVENTORY MORE THAN EVEN FIREPOWER AND ORDNANCE TO DEFEAT THE LIGHTLY ARMED ISIL COMBATANTS. IT IS NOT EQUIPMENT THE IRAQI LACKS.