"The Cessna 208 Caravan is a single-engined turboprop, fixed-tricycle landing gear, short-haul regional airliner and utility aircraft that is built in the United States by Cessna."

And with a variant that has a combat capability.

"AC-208 'Combat Caravan' an ISTAR version built by ATK armed with Hellfire missiles currently being marketed to the Lebanese and Iraqi air forces. The AC-208 received its combat debut in January 2014 when the Iraqi Air Force began employing it against insurgents in Anbar province." 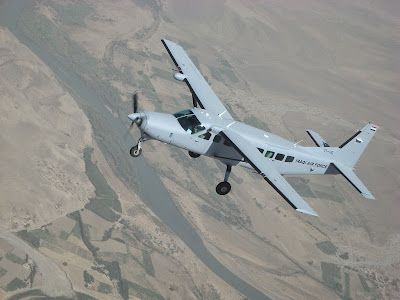 Here is the Iraqi AC-208. NO Hellfire attached during this mission. I hope the Caravan can fly high enough to be beyond the range of MANPAD!

"The light attack plane, converted by ATK company, is equipped with ISR (Intelligence Surveillance and Reconnaissance) systems and, above all, it can fire Hellfire missiles"

And as was reported by the Aviationist web site:

NOT a bad idea, the AC-208. But you are going to need a dozen or more, perhaps even dozens of these warplanes to make a difference. AND THOSE IRAQI NEED TO DO THE WORK BY THEMSELVES. A combination of ground assault on ISIL accompanied by close-air-support. NOT going to be easy.

Almost ten years on and with billions of dollars in assistance and all the Iraqis are qualified to deploy is this glorified light transport?

Was either this or a hot air balloon I guess.