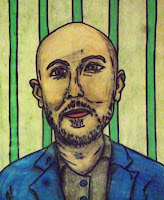 "'They've resigned themselves,' . . . But they're extremely relaxed. There is not a hint of nervousness in their faces. They're ready to fight. They've been ready for many years now. They don't want to. I asked them, 'Do you want this war?' And they're like, 'Of course not.'"

See this CNN photo-essay, images from Timothy Fadek. I recommend highly without qualification or reservation.

"On the front lines, Ukrainians brace for possible attack"

Photographs by Timothy Fadek/Redux for CNN

FATALISM AND RESIGNATION THE ATTITUDE OF THE UKRAINIAN!

"'They have embraced the inevitability,' Fadek said. 'I was talking to one of the soldiers and he said: 'It's inevitable. We've accepted this inevitability of an attack.' And then there was a little bit of an argument between two soldiers. One said, 'The Russians will not come across the border, they will attack from the sea,' meaning the Sea of Azov. Another soldier disagreed with both those assessments and said, 'No, the attack will come from Belarus.'"

"But while they might not agree with where an attack will come from, they are all 100% convinced it is going to happen."

CALM before the STORM! No matter when or where, going to be bad. Consequences almost incalculable and for the worst in all cases!

So confusing? To me it is!

From the "Western Journal" and the article by Jack Davis.

"Estonia wants to send the D-30, a howitzer that fires a 122-mm shell around 20 kilometers. The Soviet-made howitzers were passed along from the former East Germany to Finland to tiny Estonia."

At a time of crisis the usually reliable NATO partner falls flat face-down and big time. Too worried about antagonizing the Russian bear?

Correctly understanding the "transfer" of German military hardware to Ukraine more elaborate than you might think.

D-30 howitzers as originally an inventoried weapon of the East German Army [NVA]. With the reunification of Germany artillery as not desirable for NATO purposes, surplus. Acquired first by the Finns and then the Estonians. Germany STILL has a veto on further exchange between the Estonians and the Ukrainians? How does that work?

See also within context the comments and observations of Mish Shedlock:

"What's Putin Up to and What Would Germany Do If Russia Invaded Ukraine?"

"Russia is massing troops on the border of Ukraine. Some think an invasion is a done deal."

Mish an investment analyst. Think the natural gas pipeline from Russia to Germany! Freeze to death in the dark and all that! Golly!

Here with an appraisal of the Ukrainian Crisis courtesy the Russian Internet media outlet Pravda [Truth].

"World War Three: What Russia can do to bury Ukraine and herself"

"The situation around Ukraine has become very unhealthy recently. For some reason, Western policy-makers and mass media assume that Russia's imminent invasion of Ukraine is a fact. These days, we have witnessed a series of bizarre actions via the diplomatic line."

"At the same time, the scenario of a full-fledged military intervention also involves various options."

Courses of action [CoA] and options to include:

* "1. The Russian army will be limited only to the territory of the Luhansk and Donetsk regions, including possibly the adjacent Kharkov region, where pro-Russian sentiments are also extremely strong."

* "2. The second scenario allows the accession of the entire Left-Bank Ukraine along the Dnieper River to Russia. This is an excellent natural water barrier for Ukraine's counterattacks. In this case, the blockade of Crimea, which the peninsula has been suffering from for years now, will be finally lifted completely."

* 3. "The most daring option is to stop at the borders of 1938. In this case, Ukraine will be left with its western regions only."

The Canadians list "five possible scenarios for action" one of which is merely a threatened invasion but no actual military action. Intimidation of the most coarse and obvious nature achieving goals without firing a shot!

NO WHERE in the news media have I SEEN a mention of this. Normally this would merit A MENTION on the evening news!!

All thanks here to the Internet web site "Defcon Level Warning System".

DEFCON 3 properly defined as: "DEFCON 3, or Round House is an increase in alertness and military readiness, also known as 'yellow alert' status. With Defcon 3 the air force is in a higher state or level of readiness so that they can deploy and mobilize within 15 minutes time"

During the Cuban Missile Crisis of 1963 Defcon 2 purportedly declared but then ONLY for the Strategic Air Command USA!

That "an increase in alertness and military readiness" obviously in response to events as now transpiring as a response to the Ukrainian Crisis! Be afraid everyone?

"Moscow has deployed some 100,000 troops to the borders of Ukraine. What now? Putin finds himself in a situation where Russian success is defined as either a change of government in Kyiv (with the successor aligned with Moscow) or conquest of the country. The 18th-century French diplomat Talleyrand is meant to have said: 'You can do anything you like with bayonets except sit on them.' Putin must use those troops soon or face the humiliation of withdrawing them without achieving anything except pushing Ukraine closer to the west. In either case, he has placed himself in a difficult position at home and abroad. The US and its allies must do what they can to exacerbate his difficulties." - - former SECDEF [USA] Gates.

"The Indispensable Nation: a Return of Forces to Europe"

"Regulars here on the Front Porch [the Commander Salamander web site] know I want none of this. How long have we begged continental Europe - especially the strong powers such as Germany - to spend enough to be a credible balance to Russia, to make the risk of conflict too great, to force her to look to other means besides violence and blackmail to learn to live with her neighbors?

1. Former Secretary of Defense [USA] Gates a man of marked career achievement his pronouncement should causing concern for all!

2. With regard to the NATO allies of the USA unwilling to pay the agreed amount as seen as requisite for their to be a credible military deterrent in Europe see a much prior blog entry from Rabbi Dov Hilkind.

3. Agreed also that Putin may have placed himself where he cannot extricate from the current situation with the Ukraine UNLESS he does get some meaningful concessions for the USA and NATO. And quick too.

This is coolbert:
“What this round has done is it’s going to make tactical planning in an operational environment a lot easier. The term that we use is 'Battle-Carry', what round we have in the breach when we enter combat, usually that’s going to be decided by what we expect the enemy to be throwing at us if we’re expecting tanks, we’re going to battle carry SABOT, our tank defeating round,' . . . '[The AMP] allows us to battle-carry that round without fear of running into a different enemy.'”
Battle-carry dilemma solved? See this impressive You Tube video.
"Here's the Most Deadly Projectile on Abrams Tank Right Now"

More than anything else the video of the AMP round in slow-motion photography very impressive. Especially when impacting a target. That cost of a single round when fired exactly what? I might think that the cost rather large when taking into account the fifteen year research and development expenditure. No more "battle carry" dilemma?
See previous blog entry the X-AMP no longer a X!
coolbert.

Continuing with discussion of the famous T-34 Soviet tank aspects plus and negative the Second World War.

See previous discussion of the T-34 here and here.

Even the most fanatical of the herrenvolk not adverse to using captured T-34 in battle!

"Waffen-SS units also did not hesitate to use captured T-34/76 tanks and 2nd SS Panzer Division 'Das Reich' and 3rd SS Panzer Division 'Totenkopf'' pressed significant number into service. T-34/76 tanks used by 'Das Reich' are of particular interest. When in March of 1943, SS Panzer Corps recaptured Kharkov, some 50 various models of T-34/76 tank were captured. All of those were being repaired in a local tractor [Soviet] tank) factory that was overrun and designated as SS Panzerwerk (SS Tank Workshop). Shortly after they were repaired along with being modified to German standards, repainted and marked with German markings. Modifications included installation of commander's cupola (from damaged Panzerkampfwagen III and IV tanks), Schuerzen (armor skirts) and other equipment such as [the] Notek light, storage boxes, tools, radio equipment and antenna. 25 of them entered service with newly created 3rd SS Panzer Battalion of 2nd SS Panzer Regiment of 2nd SS Panzer Division 'Das Reich'."' 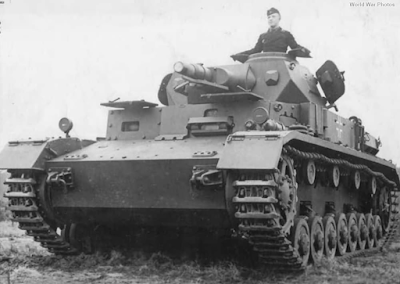 A German Pz IV and not a Soviet T-34. Image Source: www.worldwarphotos.info courtesy the Internet web site tanks-encyclopedia.com. That is probably not Emil Seibold in the image.

I am curious if anyone has an idea what percentage of those "kills" as attributed to Seibold were while in command of a modified T-34? Any devoted reader to the blog having an idea?

Those "minor" improvements made by the German to the Soviet T-34's probably making a considerable difference in effectiveness?

Two adversaries fighting it out with MATCHED gear in the era of mechanized warfare. There exists no other example??