"In a very interesting infographic on Medium, Matter Magazine offers us a paint by numbers assessment of the ISIS threat.""

"Among other things, the Islamic State has a shocking amount of money — $2 BILLION dollars — four times as much as the Taliban. And their wealth is growing, with $3 million dollars a day in oil and gas revenue from captured facilities. (If you’re wondering who is buying, it’s all black market.)"

THAT IS $2 BILLION IN THE BANK BUT ALSO WITH A CONSTANT AND CONTINUING INCOME STREAM. 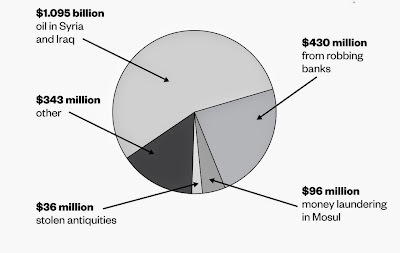 Sale of stolen antiquities a smaller portion than what I had imagined. Ancient artifacts from Mesopotamia not having intrinsic value to the jihadi but a cash source in the furtherance of warfare when sold to western collectors. Otherwise considered to ISIL as products of jahiliyyah, a time of ignorance.

First it was only 3,000 combatants. Then many thousands, then 15,000, and NOW 80,000. Those figures are outrageous and unsubstantiated estimates without foundation?

That area of Iraq and Syria under ISIL control for comparison sake about half the size of the United States east of the Mississippi river!