"Cue to 48 hours later, when hundreds of thousands across the west were glued to the screen of flighradar24.com (until the website was hacked), tracking 'SPAR19' – the US Air Force jet carrying House Speaker Nancy Pelosi – as it slowly crossed Kalimantan [Borneo] from east to west [west to east actually], the Celebes Sea, went northward parallel to the eastern Philippines, and then made a sharp swing westwards towards Taiwan, in a spectacular waste of jet fuel to evade the South China Sea."

From an Internet web site commenting on the circuitous flight route of the aircraft carrying USA Speaker of the House of Representatives Nancy Pelosi from Malaysia to Taiwan.

"SPAR19 becomes the most tracked flight of all time" 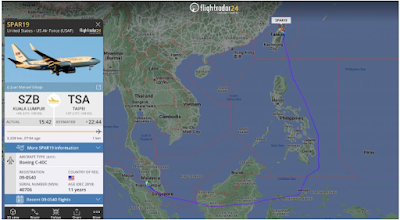 Click on image to see an enlarged view. Roundabout for Nancy. Precautions and prudence. Direct flight over the South China Sea seen as too hazardous. Proper measures taken.

"From the time it lifted off from Kuala Lumpur at 15:42 local time, SPAR19 was already the most tracked flight on Flightradar24 among active flights. By the time it landed in Taipei, SPAR19 was being tracked by more than 708,000 people around the world, making it the most tracked live flight in Flightradar24 history. Over the seven hours from Kuala Lumpur to Taipei, a total of 2.92 million people followed at least a portion of the flight."

I indeed had a worry that the Chinese would try to interfere in the SPAR19 flight to Taipei. Threats made repeatedly and with some vigor. An overflight and intrusion of the South China airspace as claimed by the Chinese might have well been seen as an unmistakable challenge and deliberate provocation that had to be answered with a military response of some sort.