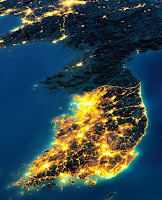 From the Internet web site of MarkoZen this weapon I was vaguely aware. Paragraph as extracted I find to be somewhat strange.

"The U.S. has used this bomb to knock out power grids in Serbia and Iraq.  It is currently delivered by F-15 E Strike Eagles."

"The BLU-114/B is a special-purpose munition for attacking electrical power infrastructure. Although very little is known about this highly classified weapon, reportedly it functions by dispensing a number of submunitions which in turn disperse large numbers of chemically treated carbon graphite filaments which short-circuit electrical power distribution equipment such as transformers and switching stations. The weapon is sometimes referred to as a 'soft bomb' since its effects are largely confined to the targeted electrical power facility, with minimal risk of collateral damage."

SO IMPRESSED WHERE THE SOUTH KOREAN WITH THE "SOFT BOMB" THEY HAVE DEVELOPED THEIR OWN VERSION. ATTACK THE NORTH KOREAN POWER GRID IN TIME OF WAR!

"South Korea has announced plans to build graphite bombs for use against North Korea to paralyze its electric grid in the event of a new war breaking out on the Korean Peninsula, subject to funding from the country’s finance ministry. The weapons have been developed by South Korea’s Agency for Defense Development, Yonhap news agency reported, as one element of the kill chain pre-emptive strike program."

My intuitive and instantaneous response to all this being: "WHAT POWER GRID NORTH KOREA?"