A stupid mistake! Or something more so?

Consider within context of a very previous blog entry. Imagery with a military dimension confusing.

By | Fox News as reported covering the Democratic convention of 2012.

"Democrats apologized Wednesday for using a fleet of Russian warships as the backdrop for a Democratic National Convention tribute to U.S. military veterans, blaming a vendor for the mistake."

"The event occurred on the final night of last week’s convention when retired Adm. John Nathman paid tribute to veterans, in front of a gigantic screen that showed four ships from the Russian Federation Navy." 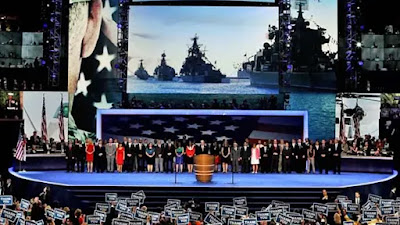 Russian warships steaming and not American. A tribute to American veterans as at the Democratic national convention 2012.

"The mistake was exposed earlier this week by at least two experts who told The Navy Times they were certain the ships were Russian and that the backdrop image appears to be a composite photo that includes U.S. trainer jets flying overhead."

My instantaneous and intuitive response to this incident was that it was not just a stupid mistake. Was a deliberate insider joke. Done on purpose, a prank with a less than innocent motivation. Even done as an insult and intentionally so! My opinion.