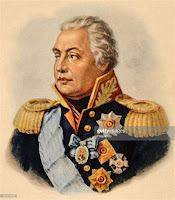 "'in modern history, there is no situation comparable in terms of the deaths of generals,' . . . 'on the Russian side, in a two-month period, we've seen at least a dozen, if not more, Russian generals killed.'" - Admiral James Stavridis,

"Death of Another Russian General in Ukraine Signals Lack of Lower Officers: Report"

The Russian general Kutuzov has perished in combat? Actually leading his men forward? Leading from the front very risky for a very senior commander and generally strongly discouraged by the top brass.

"The death of another Russian general in the war in Ukraine is a sign that there are not enough lower ranked officers to carry out all the missions, according to a Russian state journalist, Business Insider reported on Monday."

"The BBC reported that Kutuzov's death came as rumors circulated on social media that a second senior officer, Lt.-Gen. Roman Berdnikov, commander of the 29th Army, was also killed in fighting over the weekend, but the BBC said it was unable to independently verify those claims."

From my perspective the Russian army junior officers and enlisted needing to be prodded forward. Recalcitrant to perform their duties in a vigorous manner with esprit'. Faith in a quick and relatively easy conclusion to the war with the Ukrainian military gone and making for a lot of disenchantment.