Son of Predator takes to the skies Ukraine! Gray Eagle.

"The White House has plans to sell Ukraine four MQ-1C Gray Eagle drones to help Kyiv in the war against Russia."

"The Biden administration plans to sell Ukraine four MQ-1C Gray Eagle drones that can be armed with AGM-114 Hellfire missiles for battlefield use against Russia, three people familiar with the situation said . . . "

That great fear [?] is that Gray Eagle can range beyond the borders of Ukraine and strike targets in Russian proper. Belarus, Crimea, Black Sea also a possible operation area for the UAV. See the map. Yellow line distinguishes the internationally recognized border between Ukraine and surrounding nations. Areas in scarlet and purple Russian targets fair game? 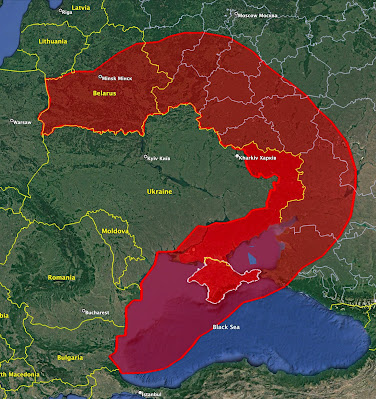 "Ukraine Battle Map @ukraine_map Jun 1: Map of Areas that the MQ-1C Gray Eagle Drone can reach when launched from Major Ukrainian Airports. USA is planning to sell Ukraine 4 MQ-1C Gray Eagle Drones which have a range of 400 Km [about two-hundred fifty miles] and can fly for over 30+ hours, and can carry up to 8 [?] Hellfire Missiles"

It should be noted however that the Turkish combat drone Bayraktar TB-2 as already in use by the Ukrainian has a range of 300 kilometers [about one-hundred eighty miles] not a whole lot less than the Gray Eagle.

FEARS of Gray Eagle causing territorial escalation of the Ukraine Conflict unfounded? Four drones are not going to make much of a difference anyhow?