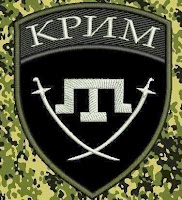 From Reuters By Max Hunder.

"YASNOHORODKA, Ukraine (Reuters) - Standing amid the charred remains of a roadside hotel on a major highway near Kyiv, Isa Akayev explained what drove him to build his Muslim volunteer unit and fight for Ukraine."

"When Russia annexed his home region from Ukraine in 2014, Akayev moved to Kyiv and formed the Crimea battalion, a small unit dominated by Crimean Tatars, the Muslim Turkic group indigenous to the Black Sea peninsula."

Tatars fighting for the Ukrainian against the Russian, the Ukraine Conflict.

Tatars with a lot of animosity toward the Russian. Under Stalin the Tatars as a mass group deported to Siberia. Collaboration with the German during WW2 the paranoid Stalin as perceived. Punish the Tatar the whole lot of them. And did!

Crimea until 2014 was an integral part of the Ukraine and had been so during the Soviet era also. A popular vacationing spot for cold-weather Russians during the prolonged and harsh Russian winter. Ukrainians and Tatars get along? Of that I am not sure. Given the deportations of WW2 and the events of 2014 the Russian and Tatar hardly getting along I am more sure.