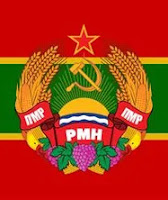 "On May 25, Transnistrian authorities lowered the terror threat level from red to yellow"

"The Investigative Committee of Transnistria reported a sabotage, carried out in peacekeeping contingent deployment location."

* My initial response was that this drone was Ukrainian dropping a shaped charge. NO! RGD-5 a conventional Soviet era hand grenade and not a shaped charge anti-armor grenade.

* Read further those peacekeepers their mission strictly [?] the guarding of the Cobasna ammunition depot. ONLY two kilometers [about three and one-half miles] from the Ukrainian border. Prepare yourself for a mighty bang if that depot goes.