Surely this one must be categorized in the strange but true category.

Establish bona fides and gravitas. An EXPERT on the subject. 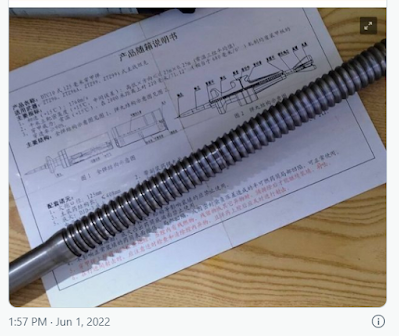 Appears to be a schematic of a Chinese anti-tank round as possibly fired from the gun of a main battle tank. A HVFSAPDS round as referred to. High-velocity fin-stabilized armor-piercing discarding-sabot. Whoever released this document to "prove" their knowledge and expertise possibly more than likely leaking classified information.

"Task and Purpose reports that fans of the popular online free-to-play military video game War Thunder have become so passionate about the game and military history that they’ve begun sharing classified schematics of real-life military vehicles during online arguments."

"This has now happened on three separate occasions, with users leaking classified military documents in an effort to ensure that War Thunder is as accurate to real life as possible. The game features land, air, and sea craft, and has a player base of roughly 50,000 players. The latest incident involves information on the penetrator section of a Chinese tank cannon shell leaked in a post in Mandarin Chinese which includes a technical diagram."

Gonna be hell to pay for the culprit when caught. And I sure the Chinese going to be assiduous in hunting the individual down with the maximum penalty a possible.

Need I say what the maximum penalty for such an offense in China would be?