This is coolbert:
More Ukrainian military success the Black Sea.
Oil and gas drilling rigs the Black Sea attacked by Ukrainian  missiles with significant damage.
From Ukrayinska Pravda 20 JUNE 2022. [Ukrainian Truth]
"Ukrainian defenders attack "Boiko towers" stolen by Russia in the Black Sea"
"The Armed Forces of Ukraine have hit the 'Boiko towers' - drilling rigs belonging to the Russian-appropriated Chornomornaftogaz [an oil and gas company located in Simferopol, Crimea, that was 'nationalized' by the Crimean authorities after the annexation of the peninsula]."
Quote from Aksenov: "This morning the enemy struck the drilling rigs of Chornomornaftogaz. I am in touch with colleagues from the Ministry of Defense and the FSB [Russian Federal Security Service] and we are working to save people." [Sergei Aksyonov, Russia’s puppet leader in Crimea] 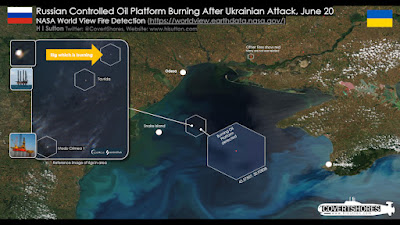 This satellite view an image taken from the H. I. Sutton Internet web site "Covert Shores". Click on image to see an enlarged view. See also the H. I. Sutton article the attack on the Boiko Towers as much as is presently known. All thanks to H. I. Sutton.
The Boiko Towers deemed a legitimate target by the Ukrainian. As alleged military-grade radars have been mounted on the towers by the Russian that allow for extensive coverage of the Black Sea.
coolbert.
Posted by Albert E. at 7:58 PM