"It said the 5.5-ton Kh-22 missiles, when used in ground attacks with conventional warheads, are highly inaccurate and can cause severe collateral damage and casualties." 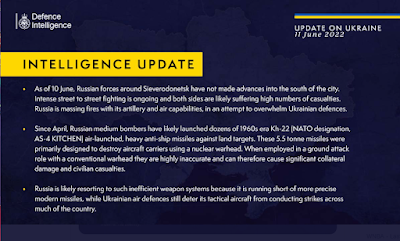 "Russia is likely using such weapons because it is running short of more precise modern missiles, Britain’s Defence Ministry said in a daily update. It gave no details of where exactly such missiles are thought to have been deployed and there was no immediate confirmation from Ukrainian authorities of the use of the heavy missiles."

AIR-TO-GROUND missile as carried to the vicinity of the target by a Russian Tu-22M3 medium-bomber!

"The first combat use of the missile was reported during the 2022 Russian invasion of Ukraine. On 11 May 2022, a video emerged on internet showing a Russian Air Force Tu-22M3 strategic bomber launching a pair of two Kh-22 missiles at targets somewhere in Ukraine."

Stockpiles or Russian precision guided missiles low? Must be husbanded for future use if needed. Kitchen to the rescue? Hardly precise but still making a mighty bang if it hits the target! At least no use of atomic warhead. At least!