"America's best fighter, forgotten today, was the mighty P-47 Thunderbolt. Powerful, fast, heavily armed and armoured, it absorbed the Luftwaffe's blows during the AAF's difficult days in 1942 and '43."

That P-47 Thunderbolt in the tactical aviation role most impressive.

Tactical aviation in the ground-attack mission especially so during the Battle of France [1944].

German ground forces subjected to ground-attack on a relentless basis the P-47 ideally suited for the task. 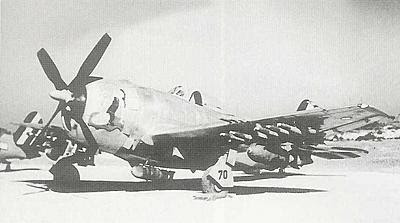 The American tactical aviation assets primarily the P-47 operating out of field expedient airfields well forward, German units unable to move during hours of daylight without coming under attack.

That soil of the Normandy area more suitable also for the construction of those "field expedient airfields". As advanced the armies eastward, so did the air strips and the P-47 warplanes.

Consider merely this one incident from the Battle of France [1944]:

"Thirty-six P-47's of the 406th Fighter Group took off on September 7, 1944 at 15:05 hours and raced south of the Loire River to find the road from Chateauroux to Issoudon clogged with military transport, horse drawn vehicles, horse drawn artillery, armored vehicles and personnel. Attacking this enemy concentration, at minimum altitude, in spite of accurate ground fire, the...pilots...made pass after pass until their bombs, rockets, and ammunition were expended. The road was blocked for 15 miles with personnel casualties, wrecked and burning military transport. More than 300 enemy military vehicles were destroyed in this attack alone."

This almost sounds like that Turkish brigade annihilated during the withdrawal from Megiddo, 1918.

Strafing attacks by allied tactical aviation in Normandy most deadly in that regard at a most crucial moment, a significant number of senior German combat commanders killed and wounded !

"Fight the enemy with weapons you have and he does not" - - Suvorov. Surely in Normandy that was the case with the P-47!!

I had an uncle who during WW2 worked on P-47s in England. He told me it took 4 (or 5) men to change a P-47 engine over the course of two days. A lot of work needed to be done to remove rivets from the skin and fairings before working on the engine and then again after the change.

Now why did the soldiers need to change an engine? The answer is that the P-47 had something that was called "war emergency boost" which was the ability to spray HOH or HOH and Methanol into a cylinder during a power stroke to get more horse power. The downside was that its use destroyed the engine over time. He said that during combat the pilots constantly used the BOOST and subsequently few engines lasted more than 25 hours. He helped change engines constantly during those years. The engineers who designed the P-47 did not make engine changes easy.

Bert says: A team of aeronautical engineers sat down in a Washington D.C. hotel room for three days and wrote the P-47 aerodynamic equations and calculations that were presented to the USAAF. Today banks of computers and thousands of hours of computer time would be needed to determine the fly-ability of a modern combat warplane.

The terrible machine.
A large and clumsy.

P-39 was also the host of a lot of manufacturing defects (back of head) of the pilot's almost impossible to be saved, as the doors of the car, allison engine, etc.etc ..

P-39 machines were used very much Finnish front (post war) Finland (FAF) Brewster Buffalo Curtis -36, Morane Saulnier, Fiat 50, and Me 109 planes.
as well as the Kittyhawk, tomahawk, warhawk, and Boston bombers.
Also, the British Hurricane and Spitfire planes had been used plajon and the British also trained a lot of pilots in the Soviet Union (41-43) Leningrad region.