Gone with the wind.

That USS Miami nuclear attack submarine heavily damaged as the result of arson NOW to be scrapped.

Funds available for repair [even beyond what already allocated for refurbishment] now lacking, the submarine now to be stricken from the registry and turned into scrap metal.

"PORTLAND, Maine –  The Navy has decided that it will not repair the nuclear-powered submarine USS Miami after concluding that the cost of repairing damage from a fire set by a civilian worker is more than it can afford due to mandated budget cuts." 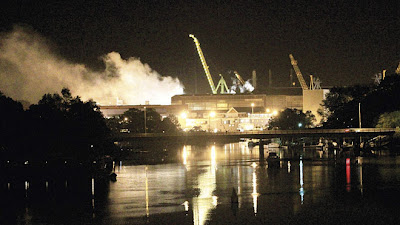 "The decision to scrap the Groton, Conn.-based sub comes after a damage assessment by the Navy found that estimated repair costs, originally estimated to be about $450 million, have risen dramatically"

The sub while in dry dock originally for refurbishment, now needing in addition extensive and almost overwhelming repair. Beyond the costs of funding of which had already been allocated.

As had been the subject of a previous blog entry from less than a year ago, the USS Miami the object of an arson attack by a disgruntled worker that man responsible claiming an "anxiety attack".

One man, one match, and poof! Strange and hard to believe but true.