This was a new one on me.

That Italian air force flying the:

That latter a war bird in the manner of the A-7. 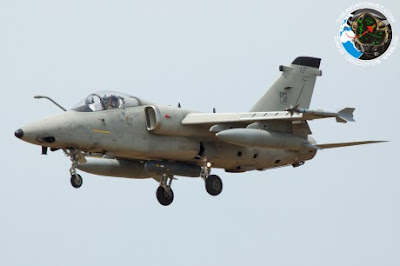 Lightweight and versatile, relatively cheap, but with good performance. You can proliferate the battlefield [airspace} with such a combat war plane, numbers do count.

NOT an all-purpose multi-role combat aircraft but then NEVER intended to be so. Does the mission for which it was intended [tactical air support] but does it WELL!

"On May 30, the Italian Air Force celebrated the first 200,000 flying hours (FH) of the Alenia Aermacchi AMX jets."

"The Italian AMXs, that emerged as some of the most cost-effective assets during the Air War in Libya and, much earlier, during the Allied Force in Serbia and Kosovo, have flown more than 7,000 FH in Afghanistan since 2009, carrying LGBs (Laser Guided Bombs) or Reccelite reconnaissance pod."

"The AMX International AMX is a ground-attack aircraft for battlefield interdiction, close air support and reconnaissance missions . . . The AMX is designated A-1 by the Brazilian Air Force, and A-11 Ghibli by the Italian Air Force."

That AMX an unique and indigenous Italian design. Suvorov the Soviet GRU intelligence officer and defector commenting on the abilities of the Italian engineer:

"There may be some people who underestimate Italy as a country of great thinker, but not the GRU. The GRU know that the Italians have very good brains, the brains of great inventors. Few people realize that before the Second World War Italy's technology was at an incredibly high level. The Italians were not especially brilliant in battle, and that obscured the extent of  Italian achievement in military technology."

As it was seventy years ago apparently it is the same now!