This particular incident of itself not particularly unique, but within the context of the global war on terror [GWOT] and recent threat warnings as issued by American intelligence we must take pause and wonder.

That "US-bound Airbus" diverted in a peculiar and unconventional manner, and the inclusion of military air-traffic-control [ATC] elements also most unusual.

"However, something weird happened as the Airbus burned off fuel to reduce its weight over southeast England: as airband monitors and aircraft enthusiasts noticed, the emergency sparked an unusual type of reaction by the British Air Traffic Control (ATC) agencies." 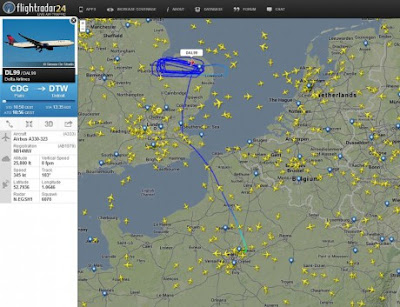 This image shows the flight path [blue line] of Delta 099 with those yellow crosses indicating other air traffic in the area.

"Indeed, Delta 099, that was already in positive radio and radar contact with the civil ATC, not only switched to a London Military ATC control frequency, but did also squawk a London Mil transponder code: in other words, it was momentarily handed over to a military ATC agency."

These various comments as posted on the web site in response to the article also very interesting. Persons obviously "airband monitors and aircraft enthusiasts":

* "Move along there, nothing happening here. An aircraft calling mayday in the UK will use 121.5 frequency which is handled by London Mil. The aircraft will be 'handled' on their frequency, rather than clogging up the usual airways frequency."

* "Most probably you are right. Still, what is interesting is that British milair [military air] monitors found it weird; enough to consider every option. BTW, the aircraft did not radio a mayday and did not declare emergency on 121.5 nor squawked emergency codes."

More than anything else too, this capacity for "amateurs" and "enthusiasts" to avail themselves of technology and data of a sophistication level that once only the purview of select few is most amazing and all thanks to the Internet..

As was stated, NOTHING did happen. But there were concerns that were out of the ordinary and observed by those that are in the know.