Tank competition in the manner of the Canadian Army Trophy. American and Russian tankers testing their skills driving and gunnery both.

"As to what exactly happens in a tank biathlon, think of a regular biathlon — then forget about it"

"In the tank biathlon, every tank runs almost 20 kilometres at a maximum possible speed, while firing from all weapons the targets, which are rising in different directions and distances. On the course, a tank has to pass repeatedly a ford, fences, a rut bridge, high-speed sections and overtaking passages. At all the times, the crew remains constantly in the firing position."

American Abrams tank of the latest mark versus the T-90 I might suppose. That T-90 able to fire an anti-tank guided-missile [ATGM] and also on demand a surface to air missile [SAM].

"The T-90 is a Russian third-generation main battle tank that is a modernisation of the T-72 . . . It is currently the most modern tank in service with the Russian Ground Forces and Naval Infantry. Although a development of the T-72, the T-90 uses a 125mm 2A46 smooth bore tank gun, 1G46 gunner sights, a new engine, and thermal sights." 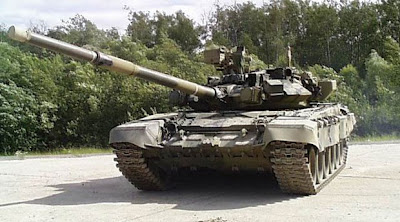 This will become an annual or bi-annual competition? These sorts of events used to be quite popular during the height of the Cold War but mostly involving sports teams and never anything as I recall having a military dimension to it.

See this Pravda web site article comparing the Abrams with the T-90. An appreciation from the Russian point-of-view.

Russian versus American DACT exercises is next? Top Gun over Siberia surely!