From various sources some indications that tensions remain high in the South China Sea and further afield [at sea]. Those territorial disputes to include but not solely the Spratly Islands unresolved and remaining so for any time into the foreseeable future .

An ARMS RACE IS NOW AFOOT!

Where a need exists the need is being satisfied.

Japanese and Filipino both seeking a counter to the almost overwhelming Chinese naval and military advantage having apparently made the decision to bolster their own military might in a significant manner, not desiring to be so reliant on American assurance and deterrence.

"SUBIC, Philippines — The Philippines on Tuesday celebrated the arrival of a decommissioned U.S. Coast Guard cutter as its second major warship to challenge China's massive territorial claims that Filipino officials say have intruded into their country's potentially oil-rich offshore seas."

"The Philippines has boosted its presence in the South China Sea, prompted by an ongoing island dispute with China, by sending a second vessel to the area."

A second American Coast Guard cutter [Hamilton class] having been decommissioned and  refurbished, sold [?] to the Filipino, a significant boost to the meager naval assets of the Philippines.

"The Hamilton class cutter . . . [is armed with a] a much more modern 76 mm (3 inch)/62 caliber weapon. The primary mission of these vessels is enforcement of laws and treaties and search and rescue (SAR) on the high seas, including the U.S. exclusive economic zone."

That EEZ [exclusive economic zone] to include the Scarborough Shoals.

This Coast Guard vessel NOT a warship as that term "warship" normally understood and defined. Has an offensive capability somewhat limited. TRADITIONALLY THESE CUTTERS ARE KNOWN FOR PATROL, COASTLINE SURVEILLANCE AND INTERDICTION OF SMUGGLERS, ETC.

Organic armaments: "76 mm cannon, 2x 25 mm Mk38, 20 mm Phalanx CIWS (Close In Weapons System)". The vessel I can see has a helicopter landing pad and presumably will have a UAV capability.

"Japan has unveiled its biggest warship since the Second World War as part of a plan to bolster its defense of territorial claims in disputed waters."

"Japanese authorities revealed the 250-meter-long destroyer Izumo at a ceremony in Yokohama on Tuesday. The $1.2 billion Japanese-made vessel will be capable of carrying at least nine helicopters when it goes into service in 2015." 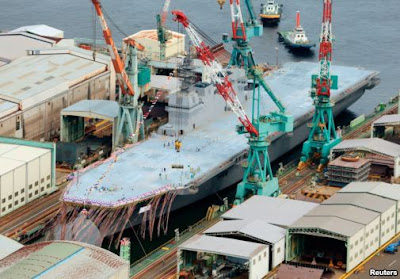 Described as a destroyer/carrier. Organic the nine helicopter I would think those choppers having AN OFFENSIVE CAPABILITY OF SOME SORT. This Izumo has somewhat the appearance almost of a jump-jet type carrier.

Destroyer/carrier? That is a type of warship as has not existed before? This vessel has the purpose primarily of anti-submarine warfare [ASW]?

THE JAPANESE AND FILIPINO TOO DECIDING AND AGREEING TO A LONG TERM CONTRACT, ACTING IN CONCERT, MORE "PATROL BOATS" AS PROVIDED BY THE JAPANESE NOW ON ORDER!

Those Hamilton class cutters [now "warships'] in this context seen as a stop-gap measure, only temporary additional patrol boats brand new providing a much more credible deterrent force perhaps the design and weaponry task tailored to the mission?

"Japanese Prime Minister Shinzo Abe pledged support for Philippine maritime forces on Saturday as both countries confront China in separate territorial disputes . . . Abe announced that Japan will provide a concessional loan to build 10 coast guard patrol boats for the Philippines. The Philippines has already received two coast guard ships from the United States as it seeks to build a deterrent naval force after China took control of a disputed shoal off the northwestern Philippines last year."

Again, the game is afoot, the arms race has just begun, hold your breath, but not for too long.