From this headline and article courtesy of the Times of Israel thanks to the tip from Freeper the Israeli populace taking appropriate measure in response to the ever worsening situation in Syria.

That Israeli citizenry obviously worried they might come under chemical attack!!

Masks being issued with filters but sans the antidote to nerve gas poisoning.

"In May, Prime Minister Benjamin Netanyahu announced a $350 million initiative to equip every Israeli with a gas mask, but as of this week there were only enough to service 60% of the population" 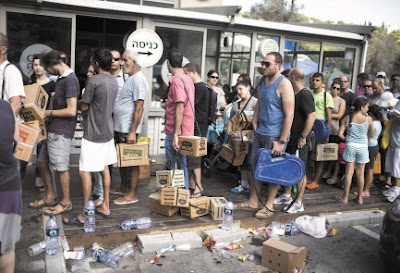 This image thanks to Israel Hayom shows Israeli civilians lined up to receive their gas masks.

My understanding is that EVERY Israeli had been equipped with a gas mask of inexpensive but use-able design.

And also the filters in a sealed bag with a shelf-life of about seven years.

This IS NOT THE CASE AND MAYBE HAS NEVER BEEN SO?

To an extent you can understand why the masks are being issued without the necessary antidote for nerve gas poisoning.

Those antidotes for nerve gas poisoning atropine and pralidoxime of themselves POISONS LETHAL UNLESS ADMINISTERED CORRECTLY AND WHEN NEEDED!

Normally the issuance of a gas mask and antidotes to trained personnel done ONLY in a time of crisis. The abuse of mis-use of the antidotes might lead to death EVEN when not under chemical attack.

That Syrian Alawite population [3 million of them] each and every Alawite having that latest version Russian gas mask with filter. So have been the reports, Assad having months ago "made ready" with regard to chemical warfare.

Personally I own an Israeli gas mask with Finnish manufactured Mark 95 [produced according to exacting Israeli standards] sealed-in-bags filters. Adequate for the task if you are trained. I do live upwind of that MOST NUCLEAR SPOT IN THE UNITED STATES!

P.S.: Warning! To all Israeli readers of the blog. Those filters for the gas mask even when in a sealed bag have a shelf live. I believe about seven years. Beyond that not effective. AND if a filter at any time has been removed from the sealed bag it immediately begins to absorb moisture and in a short manner of time even when not exposed to chemical attack becomes non-effective. Bear that in mind!