Thanks to the article by Jim from StrategyPage surely another indication that "arms race" in the South China Sea and environs heating up.

The Filipino now desiring an independent and organic offensive naval capability. Purchasing BRAND NEW and unused warships from the Italian.

The Philippines up-until-this-point content to purchase refurbished and re-built American Coast Guard cutters. Those cutters not necessarily meeting the definition of a warship?

The Italian frigate Maestrale make no mistake about it, however, A WARSHIP!

"The Philippines has decided to buy two newly built Italian Maestrale class frigates for $208 million each. Italy has some older Maestrales for sale at a much lower price but the Filipino navy is full of second hand ships, and the government wants some new ones to help persuade China to back off from claiming many shoals and uninhabited islands off the Filipino coast."

"The Maestrales are 3,100 ton ships, each armed with four anti-ship missiles, short range anti-aircraft missiles, a 127mm gun, two autocannons for defense against missiles, and eight torpedo tubes. Two helicopters can be carried. These ships are well equipped for anti-submarine operations. Top speed is 59 kilometers an hour and crew size is 225." 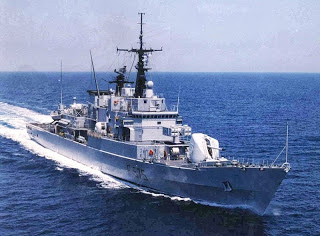 Those helicopters able to fire either anti-ship missiles and torpedoes I might think!

As usual I refer to the comments of the Soviet defector and GRU case officer Suvorov:

"The GRU know that the Italians have very good brains, the brains of great inventors. Few people realize that before the Second World War Italy's technology was at an incredibly high level. The Italians were not especially brilliant in battle, and that obscured the extent of  Italian achievement in military technology."

And this question posed to devoted readers of the blog! If you were a Filipino naval planner and considering the purchase of anti-ship missiles [ASM] of whomever manufacture to be employed in the coast defense role, that one ASM most cost efficient and capable would be?