Count this as a plus for the good guys.

That F-18 fighter plane for some time as used by the U.S. Navy. 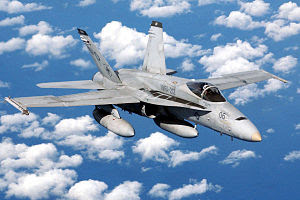 This is a F-18 but not the Advanced Super version of the Hornet. The plane does LOOK SHARP!

Thanks to Wall Street Journal, Boeing and the tip from Freeper.

ST. LOUIS, Aug. 28, 2013 /PRNewswire/ -- During three weeks of flight testing the Advanced Super Hornet, Boeing [NYSE: BA] and partner Northrop Grumman demonstrated that the fighter can outperform threats for decades to come with improvements that make the jet much harder for radar to detect and give it significantly more combat range."

"Through 21 flights in St. Louis and Patuxent River, Md., that began Aug. 5, the team tested conformal fuel tanks (CFT), an enclosed weapons pod (EWP), and signature enhancements, each of which can be affordably retrofitted on an existing Block II Super Hornet aircraft or included on a new jet."

"'We continually insert new capabilities into today's highly capable, already stealthy Super Hornet, and the Advanced Super Hornet is the next phase of this technology evolution,' . . . 'Boeing and our industry partners are investing in next-generation [NG] capabilities so warfighters have what they need when they need it, and so the customer can acquire it in a cost-effective manner.'"

"Improvements to the aircraft's radar signature, including the enclosed pod, resulted in a 50 percent reduction compared with the U.S. Navy's stealth requirement for the current Super Hornet variant. The tests also showed that the CFTs increase the jet's combat radius by up to 130 nautical miles, for a total combat radius of more than 700 nautical miles."

The U.S. Navy preferring the military warplane with TWO ENGINES! More suitable for the risky carrier type take-off? That F-18 also having become a jack-of-all-trades. Able to perform very well a variety of missions.

F-18 already a proven winner and now for "decades to come" will continue to be so? Gripen NG has a rival more than worthy of the challenge.

And the navy too very wary and afraid of the F-35 not being able to accomplish mission as desired or required? An interim alternative has been sought AND HAS BEEN FOUND?