That topic of space aliens and unidentified flying objects [UFO] NOW having a rational and objective explanation? NOT flying saucers from outer space. NOT alien space craft traveling across the galaxy or even beyond. Creatures from another world NOT observing earthlings from afar or even close-up.

The UFO phenomenon and craze still existing to some extent but much ameliorated and restrained.

"Blue Book director claimed he was forewarned of D.C. UFOs"

"Those in ufology circles have long pondered the Washington, D.C. UFO flap of 1952. Numerous reported sightings occurred in the vicinity of the capitol and were detected on radar, earning the chain of events its popular acceptance as one of the most significant UFO cases of all time. Much less popularly discussed is that Air Force Captain Edward Ruppelt, who directed Project Blue Book, claimed he was informed about the sightings – two days before they happened." 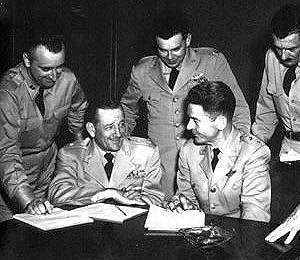 SWARMS of UFO spotted over DC during the Eisenhower administration, the story always having been that Eisenhower was told by his scientific advisers to refrain from responding in ANY MANNER, so prodigious, ominous and unknown was perceived the threat.

UFO "spotted" and "seen" NOT so much by observers on the ground with the unaided eye but rather by civilian and military radar operators? More of a figurative sighting than a literal?

UFO "spotted" and "seen" all the while those "alien" spacecraft the result of CIA/military experimentation into radar SPOOFING?

The entire "UFO flap" part and parcel of what was called Project Palladium?


"Basically, we received the radar signal and fed it into a variable-delay line before transmitting the signal back to the radar. By smoothly varying the length of the delay line, we could simulate the false target’s range and speed. Knowing the radar’s power and spatial coverage from the aircraft precision measurements, we could now simulate an aircraft of any radar cross section, from an invisible stealth airplane to one that made a large blip on Soviet radar screens — and anything in between, at any speed and altitude — and fly it along any prescribed path."

The entire UFO "craze" beginning with the "Foo fighters" as observed by all aerial combatants of the Second World War [WW2]? That detonation of the the first atomic bomb creating almost simultaneously a hysteria among the general public that an Armageddon was imminent, the very existence of the human species at stake. OF COURSE the space aliens would arrive. What else could it be?