I think most devoted readers to the blog are familiar with the Second "Blitz" of London during the Second World War [WW2].

That months long "Vee" weapon offensive commencing in the that week following the Normandy Invasion.

A concerted bombardment by thousands of V-1 ["Buzzbombs"] and V-2 [ballistic missiles] missiles, the objective to terrorize the English population and if possible level the British capital city.

That "concerted bombardment" countered by a variety of means to include:

* Bombing of the launch sites.

Thanks to the magazine "AFTER THE BATTLE" number # 57 and the article "ANTWERP 'CITY OF SUDDEN DEATH'" by Achiel Rely THIS SECOND "VEE" WEAPON BOMBARDMENT LESS KNOWN.

That port facility of Antwerp vital to the allied war effort, denial of same an obvious objective of German military planners.

During a six month period beginning in the fall of 1944 the Province of Antwerp [not merely the city proper or the port facility] subjected to attack by German "Vee" weaponry, the bombardment to include:

These V-1 and V-2 attacks not discriminate, the weapons very inaccurate, casualties about 80 % civilian, albeit the port of Antwerp the main target. 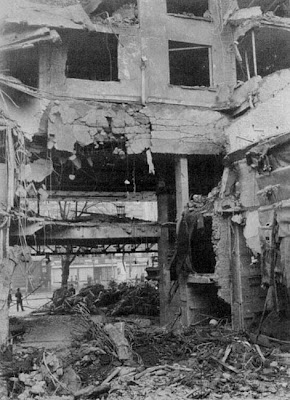 This image purportedly of the Rex cinema in the aftermath of a V-2 direct hit. The journalist Arnaud de Borchgrave for two days helping to pull bodies and body parts of the destroyed building.

"In the port itself a constant stream  of ships bringing in supplies for the allied forces was handled and unloaded by thousands of dockers. THE BOMBARDMENT NEVER SERIOUSLY AFFECTED ITS [the port] WORKING." [my emphasis.]

That V-2 of course there being no counter-measure that not being the case with the V-1, those tactics of fast fighter-interceptor and massed anti-aircraft-artillery [AAA] the allies able to mobilize an array of six hundred AAA guns American and British both AND continual bombing of launch sites effective to some degree in mitigating the flying bomb [V-1] onslaught.

That most dramatic and tragic incident of the Antwerp "Vee" weapon bombardment the direct hit by a V-2 on the Rex cinema. Many hundreds dead, bodies and body parts being pulled out of the wreckage for two days afterwards.