Thanks to the Guardian and the tip from Freeper we have this interesting item.

And placed properly in the strange but true category.

That very basis of the German diet and cuisine, the sausage, unobtainable or scarce during a period of the Great War [WW1], casings deemed a controlled item, the gut of cattle an essential element as needed for Zeppelin manufacture.

Who would have thought of such a thing!

"To millions of sausage-starved Germans, however, Zeppelins were perhaps less harbingers of a new kind of warfare than colossal reminders of the culinary sacrifices required by the fatherland."
. . . .

"With the guts from more than 250,000 cows needed to produce the bags that held the hydrogen gas in each Zeppelin, the German war machine had to choose between long-range bombing and wurst. It chose the former." 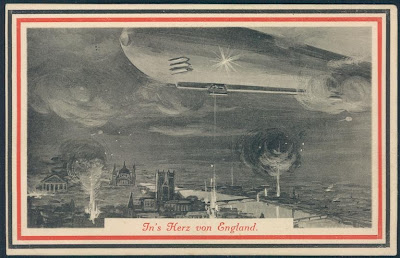 "In the heart of England". That Zeppelin WW1 bombing offensive hardly worth the effort. Zeppelin as a scouting vehicle we can understand, strategic bombardment NO!

NOT so much a lack of beef and pork but that the outer layer [casing] of the sausage in demand by butchers, the supply very limited or non-existent.

The German populace, military and civilian both during that period of WW1 suffering from malnutrition that inhibited combat and industrial operations both!

Rommel as a lieutenant finding his men unable to continue the pace during a pursuit.

Industrial accidents in the Ruhr during the war years the number of which far beyond normal, workers malnourished and hungry, not having that requisite strength to perform ordinary tasks.

Indeed, such deprivation common to all the combatants during the war? Horses the prime movers so much English land set aside for the growing of fodder the local population having to ration their diet.

Or as in the Second World War [WW2] also the German going hungry, potato as harvested a large percentage used in the production of fuel for the V-2 missile!

Give us wurst or give us the opportunity to drop bombs on England and the German chose the latter, the results of which were not so impressive? Many millions of hungry bellies knew for sure!