A most recent Strategy page article: "Excalibur Joins The Navy" NOT 100 % totally correct?

That 155 mm round as fired by the American M777 towed artillery and the naval Advanced Gun System [AGS] not interchangeable. I believe this to be so.

The Excalibur and naval AGS round however both ABLE to fire a precision long-range GPS [global-positioning-system] round, that precision with long-range.

That government of the Philippines now anxious and concerned over those territorial waters to include certain of the Spratly Islands and the Philippine EEZ [Economic Exclusion Zone] now obtaining naval armaments in increasing numbers and variety.

The Filipino NOT content with merely a mutual defense treaty with the United States for their own protection. An independent means of action for defense NOW high on the Filipino agenda.

* The Philippines in the process of acquiring ten additional brand-new cutter type vessels from the Japanese.

The Filipino perhaps also needing some sort of coastal defense and as having been speculated by myself the anti-ship-missile [ASM] with significant range [200 kilometers/120 miles] an obvious choice.

From that item as posted on StrategyPage:

"September 30, 2011: Recently, after six years of development, the U.S. Navy successfully test fired its new 155mm AGS (Advanced Gun System) cannon. Designed for use on the new DDG 1000 ("Zumwalt") destroyers, the AGS fires GPS guided shells up to 190 kilometers. The recent test firing of two shells only went out to 81 kilometers. The GPS guidance enables the shells to land inside a 50 meter (155 foot) circle."

"The U.S. Army has a similar round, the Excalibur, which entered service four years ago. Excalibur has a max range of 50 kilometers and will land within a 20 meter (62 foot) circle. In practice, Excalibur will land within a few meters of where it's aimed. Each Excalibur shell carries 9 kg (20 pounds) of explosives. The AGS shell has a longer range because it is fired from a longer barrel using a more powerful propellant charge. AGS rounds are also capable of the same accuracy as Excalibur, but it depends on the quality of the GPS signal in the area." 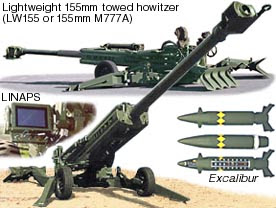 "The M777 howitzer is a towed 155 mm artillery piece, successor to the M198 howitzer in the United States Marine Corps and United States Army." And firing that GPS guided Excalibur round.

A battery [6 guns] of M777 mounted on a barge, each gun having a stabilized platform, that barge towed or pushed to various locations within Filipino waters, run aground if necessary, able to engage and defeat naval targets over-the-horizon [OTH], GPS guided munitions being given target correction while en route? Those barges located at a previously surveyed position with differential GPS affording additional accuracy. 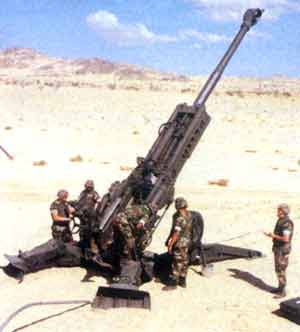 This image gives you some sense of the scale of the M777. During the Vietnam War the riverine task forces did mount a single complete battery [6 guns] of 105 mm howitzers on a barge for movement and fire support of engaged ground elements. Such a concept is not only feasible, it has been done.

Input firing data with GPS location of the target as provided by combat seaplanes. For that matter those combat seaplanes also having a formidable offensive capability themselves.

What I suggest in a speculative manner is possible? Devoted readers to the blog can comment. Please recall in all instances the Philippines is not a rich nation and the cheap and dirty but effective method if it can be found is preferred.