I was vaguely aware of this but not so sure as to the extent.

Thanks to the Ken Burns PBS television series "The National Parks" this now has been made more clear.

That national park system however without administration or protection, a variety of threats apparent:

Destruction and continued abuse of preserved land continuing, legislation notwithstanding.

"For the decade after 1872 when Yellowstone National Park was established, the park was under serious threat from those who would exploit, rather than protect, its resources. Poachers killed animals. Souvenir hunters broke large pieces off the geysers and hot springs. Developers set up camps for tourists, along with bath and laundry facilities at hot springs."

That solution being a thirty year presence of the U.S. Cavalry in the national parks, Ft. Yellowstone the archetype . A company of men on constant patrol, living rough, subjected to harsh conditions, there existing an element of danger at all times from various quarters.

Game warden then and now a very hazardous business, and recognized as so.

"Yellowstone National Park turned to the U.S. Army for help. Invoking the Sundry Civil Act of 1883, the Secretary of the Interior called upon the Secretary of War for assistance in protecting the park. The Army came to the rescue and in 1886 men from Company M, First United States Cavalry, Fort Custer, Montana Territory under Captain Moses Harris came to Yellowstone to begin what would be more than 30 years of military presence in Yellowstone." 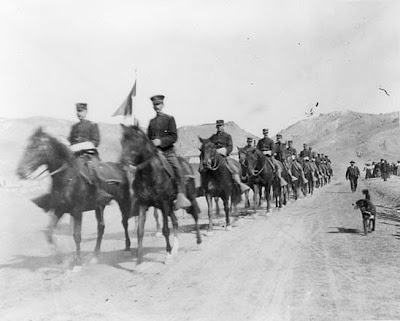 Here the company of U.S. Army cavalry at Yellowstone escorts President Theodore Roosevelt during a visit. Today a presidential visit would necessitate an entourage of about 4,000 persons!

Those U.S. Army troops guardians of the national parks not having a legal standing to enforce laws and regulations! Forbidden by posse comitatus from law enforcement action, those soldiers relying upon gentle and rational persuasion, cajoling and of course an armed presence!

That Yellowstone Basin and the national park indeed one of the great scenic attractions of the natural world and in large measure intact and pretty much in a pristine state thanks to the efforts of the U.S. Army. National parks as they now exist throughout the world often referred to as: "America's Best Idea". Yes indeed!