Here with yet one more possible solution to the Philippines military planner dilemma of how to provide coastal defense and also power projection into those adjacent waters the dominion of which contested between the Philippines and China and to include the Filipino EEZ [Economic Exclusion Zone].

A monitor type warship as fitted with the American AGS [advanced gun system]!

Combat monitors vessels used only sparingly in the last one hundred years, and then only in the riverine type of combat.

Combat monitors perhaps of the trimaran variety [American shipyards can produce such a ship in six months from start to finish] each warship equipped with a single AGS turret.

Monitors not designed to operate in deep [pelagic] waters, coastal huggers but providing a flexibility of response that might very well be effective. Ideal solution for the Philippines, island nation as it is!

Monitors of the type I am describing having not seen naval service or combat action in almost one hundred years!

GPS guidance against an ephemeral target such as a "steaming" enemy warship, early warning [EW], target acquisition [TA] and fire control [FC] is possible using the combat seaplane? See my many part series of blog entries for the combat seaplane beginning here.

These GPS guided rounds such as the Excalibur can receive an update while on-course?

"A monitor was the class of relatively small warship which was neither fast nor strongly armoured but carried disproportionately large guns."

"In the early 20th century, the term "monitor" was revived for shallow-draft armoured shore bombardment vessels, particularly those of the British Royal Navy"

Those monitors whose mission was predominantly if not exclusively shore bombardment of the "Lord Clive" class. 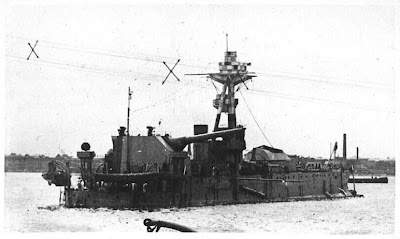 This image shows the "General Wolfe" monitor the view from stern toward the bow. That is an 18" [45 cm.] gun in that rear turret.

And several comments to a forum regarding the AGS: [all emphasis mine]

* "I seriously doubt that the U.S. Navy ever planned to use Army 155mm ammo on any of its vessels. Army 155mm ammo uses bag propellant, whereas AGS will use a metal canister which is historically much safer. I doubt the U.S. Navy or any Navy will use bag propellant ever again. As for expensive, relative to what? A cruise missile, a flight of JSFs? In any respect I'm sure? the conventional ballistic projectile will be plenty cheap."

- "The AGS was originally supposed to fire the Army's 155mm ammo, but now it cannot fire the army's ammo and needs a special and expensive 155mm rounds."

- "Originally the AGS was? supposed to have a range of 200 nautical miles, however the production AGS has a range of only 60-70 nm."

- "Only 6 AGS will be made for the 3 DDX planned, making it very expensive. Originally 32 DDX were planned with 64 AGS."

And this is correct. That cost as must have originally been stated for the AGS gun when in mass production and sixty-four of the system as required. Cost including R&D and for so few production turrets with gun [six total] the cost becomes prohibitive. 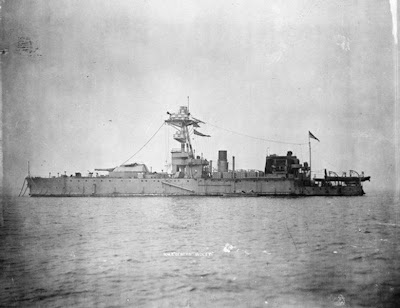 Here a somewhat better image of the "General Wolfe" "Lord Clive" class monitor from that era of WW1. A 12" [30 cm.] gun in the forward turret and that 18" [45 cm.] gun in the rear turret. This is a monitor and not a conventional naval warship capable of pelagic operation but nonetheless formidable.

Monitors that can a number of pre-designated firing positions planned in advance with a carefully surveyed GPS location for which to fire from!

This is all pie-in-the-sky nonsense on my part or is this do-able? I am not naval or artillery and am not sure. NOR am I aviation so all the talk too of combat seaplanes is an idea never coming to pass? That too is what I ask the devoted reader to the blog.