Yet one more indication the South China Sea situation is heating up. That arms race continually the pot boiling.

The Filipino increasing their naval military might yet again, this time courtesy of the French.

Thanks to StrategyPage and as shown in entirety:

"France Helps The Philippines Get Respectable Against China"

"August 29, 2013: The Philippines has turned to France to obtain more offshore patrol ships for its coast guard. The first to arrive (in 2014) is a recently retired P400 class patrol boat. The 373 ton, 54.8 meter (180 foot) long vessel has a crew of up to 29 and two ten-seat small power boats on board.  Top speed is 44 kilometers an hour and can stay out up to 20 days at a time. Armament consists of a 40mm and 20mm autocannon, plus two heavy machine-guns and some small arms. The 26 year old P400 will be refurbished before delivery to the Philippines. Total cost to the Philippines will be about $8 million. 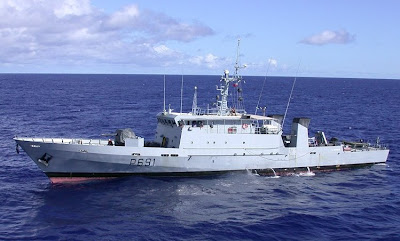 "Separately, the Philippines is buying a newly built 82 meter (271-foot) patrol ship and four 24 meter (79-foot) patrol boats from France for $120 million. The larger ship is similar to the P400 and meant to patrol hundreds of kilometers off the coast, while the smaller boats are for coastal patrols. The larger vessels will be dealing with even larger ships China is building for patrols off the coast of neighboring countries. China claims all of the South China Sea, including areas very close to the Filipino coast."

These patrol boats just that, patrol, the offensive capability limited at best. Vessels the intention of which was for patrolling the FRENCH EEZ [Economic Exclusion Zone].

That Filipino now demonstrating a certain MARKED determination to protect what they perceive as vital interests, land-masses and an EEZ in the South China Sea over which their is contested dominion.

The Filipino having only recently either obtained or contracted for a variety of naval and naval related assets. Read further here and here.