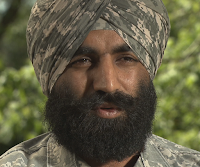 American Sikh. Exception to the rule?

My visceral reaction to this not so positive!

"The Marines Reluctantly Let a Sikh Officer Wear a Turban. He Says It's Not Enough."

"Almost every morning for five years, 1st Lt. Sukhbir Toor has pulled on the uniform of the U.S. Marine Corps. On Thursday [23 September], he also got to put on the turban of a faithful Sikh."

"Toor appealed to the commandant of the Marine Corps, which retreated a bit in August, allowing him to wear a beard and turban in limited circumstances."

FIRST THE TURBAN. NOW THE BEARD.

My response to incidents of this nature is always the same. HOW is the man going to get a seal on his gas mask if need be? And the answer is that he won't. He wants and is allowed to wear a beard now too.

Toor for the five years prior to this never once had a problem with having to shave and not wearing the turban. NOW for some reason this is major? I guess Toor prior to deployment to a combat zone can at least go sans beard?