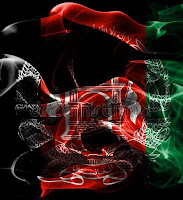 This is coolbert:
Extracts with my comments from an article by Bing West. As totally 100 % relevant to the Afghan situation but way beyond that too.

"WHO WILL TRUST US AFTER AFGHANISTAN?" by Bing West.

1. Fighting capacity and resolve of the Askari [Afghan National Army] rather decent AS LONG AS a rather minute number [2,500 USA troops] of American military remained in the country.

"The U.S. military presence, albeit tiny, motivated the beleaguered Afghan soldiers. When the Taliban massed to hit the defenses of a city, the askaris defended their positions and the U.S. air pounced on targets."

"In truth, the Afghan soldiers did fight, suffering 60,000 killed in the war. Their talisman was the American military. No matter how tough the conditions, somehow an American voice crackled over the radio, followed by thunder from the air. Those few Americans were the steel rods in the concrete. When that steel was pulled out, the concrete crumbled. The spirit of the Afghan army was broken."

"The moral is to the physical as three to one." - - Napoleon.

2. Vital American presence now gone from Afghanistan. An element critical and apparently irreplaceable beyond fighting and holding the line against the Taliban insurgents.

"our [USA] presence provided a massive spy network and electronic listening post in central Asia, able to monitor Russia, China, Pakistan, and Iran. At a cost of no American lives and 5 percent of the defense budget, Afghanistan had reached a stalemate sustainable indefinitely at modest cost."

I reiterate: "a stalemate sustainable indefinitely at modest cost"

3. American youth that small number who enlist their trust and confidence going to be greatly diminished by the defeat in Afghan.

"Our military reputation has been gravely diminished. The 1 percent of American youths who volunteer to serve are heavily influenced by their families. About 70 percent of service members have a relative who served before them."

Military service will not be valued anymore. Your duty is wasted by bad decisions made by weak-kneed and just plain dumb politicians who do not have your back.

That curriculum vitae of Bing West most impressive. When Bing speaks we all need to listen!

And as to the question of who will trust the USA in the future. NO ONE!