Just a coincidence? Just that?

Item # 1 thanks to the tip from Freeper.

"Fighter jets [ROCAF] practised landing on a highway in southern Taiwan on Wednesday as part of an annual live-fire military exercise that simulates defending the island against an invasion by China."

Commercial civilian highway of the right proportions [length and width] can make for DISPERSAL "airfields" in a time of war.

Taiwanese warplanes in a time of crisis prior to overt hostilities would need to "disperse" so as to be able to escape destruction from a Communist Chinese sneak-attack. "In time of peace prepare for war."

Dispersal now an option as demonstrated!

2. "A-10 Attack Jets Use Michigan Road For Landing And Takeoff Exercise"

"It's the first time military aircraft touched down on civilian roads in the U.S." 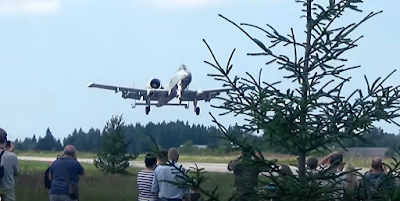 American A-10 close-air-support [CAS] warplane landing on a civilian road in the state of Michigan. Onlookers eager to witness this first-of-a-kind event that airplane actually pretty darn close to the observers.

These two take-off and landing exercises [ROCAF and USAF] occurring as they did hardly a coincidence? As a confirmation of an ability for American A-10 warplane to deploy to Taiwan in time of crisis and if necessary use expedient public highway airstrips. Solidarity with the ROCAF being demonstrated?