Here is the type of alarmist [?] headline that G2mil was speaking of.

From the Internet web site "Zero Hedge" and the article by TYLER DURDEN.

"Though this has become a near weekly occurrence at this point, Sunday's Chinese incursion was notably large, with 19 aircraft including nuclear capable bombers entering Taiwan's air defense identification zone [ADIZ]." 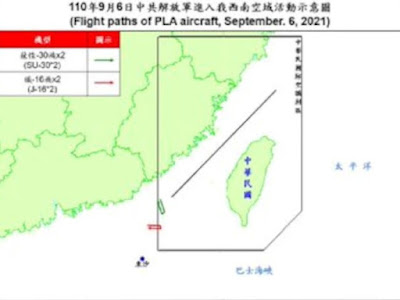 As reported by the Taiwanese Republic of China [ROC] national defense:

The way it sounds in the media Chinese combat warplanes making high-speed passes directly over Taipei. Scaring the willies out of everyone. It is not so.

"willies: noun plural. Feelings of uneasiness. n. A feeling of nervousness or fear."