From the Internet web site of our good friend Commander Salamander some more analysis the Afghan defeat.

Devoted readers to the  blog will want to:

"CNN’s summary of Sunday’s 2-hr documentary on Afghanistan has some interesting quotes from the commanders – and a few errors – I [Salamander] thought we should start the week out with."

Also consider the various graphics as posted by the Commander.

These two graphics in particular got my attention right away.

Iraq and Afghan the use of IED [Improvised Explosive Device] by the insurrectionists, the number total compared with those IED effective. 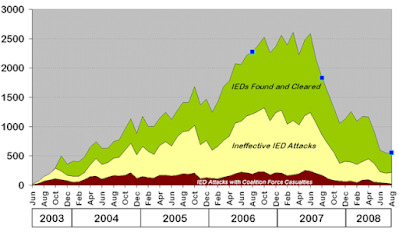 IED as used by the opposition to the allied forces in Iraq. Those effective small with regard to the number ineffective. Ineffective either from allied forces disarming or IED exploding but damage nil to slight. Even at a peak period only about 10 % of IED effective!

IED as used by the opposition to the allied forces in Afghan. So many non-effective! Again, that figure effective around 10 % at peak period of IED usage. IED obviously a threat but must not be over-rated?

Click on all images to see an enlarged view. Excellent graphics too!