Too loud? British soldiers in trouble? Back to the drawing board?

"More than 300 British soldiers are being offered hearing loss assessments after trials of the £5.5 billion Ajax armoured vehicle programme were halted due to an excessive number of noise complaints, a minister has admitted."

My instantaneous reaction to the Sputnik article is the American Gama Goat military vehicle from the era of the 1960's and 1970's. A never-ending [and never resolved] problem with the Gama Goat the noise level.

"Unit commanders and drivers told us that engine noise, which they say has been measured at about 95 decibels, restricts the vehicle's [Gama Goat] usefulness and that necessary constant on-the-move radio communication is impossible because of the excessive noise of the engine. Drivers have been issued earplugs when operating the vehicle but said that the plugs prevent them from hearing commands and instructions. Excessive noise also contributes to the severity of mechanical breakdowns because mechanical failures are not heard in the early stages. Eighty-three percent of the personnel interviewed by the Army rated the noise level loud to deafening." 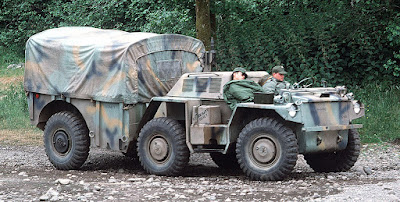 Click to see an enlarged image. Gama Goat an all-purpose transport vehicle. Not just a prime mover pulling a trailer. One GI appears to be sleeping and the other rather nonchalant. Dig the old style uniforms. You can see the proximity of the engine to the operating personnel would create a lot of difficulties with hearing. Just too loud. Ear plugs not really providing desired level of protection. On the contrary earplugs rather create a false sense of security can even injurious to the user..

Institutional memory by the design team for Ajax missing? Soldiers losing their hearing no good to anyone. Retired with permanent disability.