Some legal stuff with a military dimension.

Thanks to Zero Hedge the article by TYLER DURDEN the tip from TMGN.

"US Military Court Rules Bump Stock Is Not A Machine Gun"

WHAT IS CALLED A BUMPSTOCK ATTACHED TO A CONVENTIONAL SEMI-AUTOMATIC AR-15 RIFLE DOES QUALIFY THE WEAPON AS A MACHINE GUN.

"On Sept. 9, the U.S. Navy-Marine Corps Court of Criminal Appeals ruled that bump stocks are not machine guns in the case U.S. v. Ali Alkazahg. This is a big win for gun owners and reaffirms the fact that items that are not machine guns by legal definition cannot be classified as machine guns simply because the ATF 'feels' like they meet the definition. [ATF = Alcohol, Tobacco, Firearms] 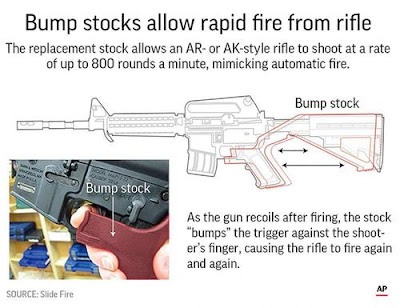 Click on image to see an enlarged view. Bump stock the term I was vaguely familiar with. Allows a semi-automatic weapon to fire in what seems to be an automatic manner, as would a conventional machine gun. The accused charged with having a machine gun but on appeal the verdict was over-turned. AR-15 in the military version called the M-16/M4 has the selector switch with the auto fire option. But that only the military weapon and not the civilian variety.

The bump stock however allows the weapon to function in apparently the same manner as a machine gun. I need to check with an acknowledged weapons authority as to what exactly is defined in the ordinary sense as a machine gun.

Bert says: Given the AR-15 was not designed specifically designed for only automatic fire, the appeal courts judgment was correct. The judgment sound and reasonable give the criteria of what exactly is a machine gun.