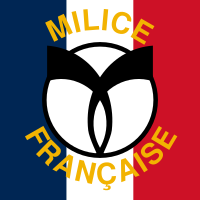 From the Internet web site Executed Today and thanks to same.

"On this date [2 September] in 1944, just days after the Liberation of Paris secured the restoration of the French Republic, six collaborators were publicly shot in the foothills of the French Alps. They were the condemned of the first court-martial to sit in liberated France."

"The French Resistance considered the Milice more dangerous than the Gestapo and SS because they were native Frenchmen who understood local dialects fluently, had extensive knowledge of the towns and countryside, and knew local people and informants. This brutal legacy resulted in the word 'Milice' having a stigma of subservience to Nazism after the war."

Vichy paramilitary Milice head-knockers collaborating with the German occupier during WW2. Despised and their legacy in France obviously a huge negative. Some summarily executed when caught by locals, others their fate determined by court ordered swift-and-sure judgment.