William Morgan an American soldier-of-fortune, an adventure-seeker, possessing some aspects and attributes of the "white messiah".

Having just recently seen the documentary/biography of Morgan as broadcast on American public broadcast television I rate it highly without qualification or reservation.

Further from the Washington Post review of the documentary:

"The story of how a former circus clown [actually a fire-eater and an accomplished knife thrower] from Toledo became a trusted commander in the Cuban revolution is one of the stranger interludes in the annals of Cuban-American friendship and betrayal." 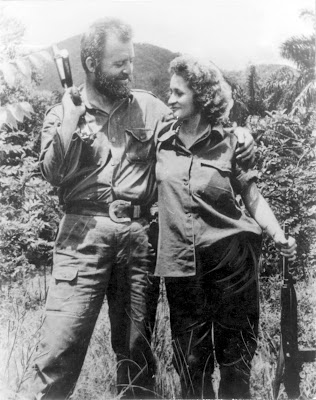 William and his Cuban wife Olga while in the Escambray mountains. As in the Hollywood versions of the "white messiah" epic, William was able to get the girl!

From the documentary as seen on PBS some key points:

* William Morgan at least until the time of his Cuban adventure the proverbial ne'er-do-well living at the very edges of American society..

* William as a young boy [fourteen years old] ran off to join the circus.

* William as a young man was a minor "street soldier" for organized crime in Toledo, Ohio, USA.

* The Cuban Revolution in opposition to Fulgencio Batista as understood in the 1950's was not solely Castro and the 26th of July Movement.

* Also consisted of an independent guerrilla group not subservient to Castro, the 2nd National Front of the Escambray mountains. This is the group William fought with. It can be suggested and legitimately argued that the 2nd National Front was actually militarily more successful and important to the finality of the revolution than the 26th of July Movement. WILLIAM NEVER A BATTLEFIELD CONFIDANT OF CASTRO.

* Before the Bay of Pigs, Mongoose, Task Force W, JM/Wave and Ted Shackley there was an earlier effort to overthrow the Castro regime. This was a conspiracy of the American Mafia, Rafael Trujillo, and possibly the connivance or tacit approval of J. Edgar Hoover.

Understand that those guerrilleros both factions in the mountains of the Escambray [Morgan] or the Sierra Maestra [Castro] and in rebellion against Batista never numbering more than several hundred combatants at any given moment.

Morgan his final end [execution] most cruel indeed. The finality to the "white messiah" story often bittersweet, INDEED it can even be suggested that part of the very mystique itself is the "bittersweet" ending!