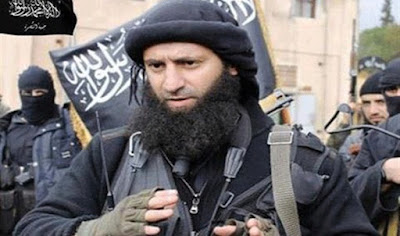 ISIL combatants dressed in the all-black uniform entitled to POW status under the Laws of Land Warfare! ISIL at this stage of the game not a rag-tag outfit but a credible and very dangerous fighting force! That ISIL combatant with beard worn long sans moustache in the Salafist manner!

"The Islamic State has recruited an army of hundreds of thousands strong militants, far larger than previous estimates by the CIA, according to a senior Kurdish leader. He said the ability of Isis to attack on many widely separated fronts in Iraq and Syria at the same time shows that the number of militant fighters is at least 200,000, seven or eight times bigger than foreign in intelligence estimates of up to 31,500 men."

"He [a senior Kurdish leader] estimates that Isis rules a third of Iraq and a third of Syria with a population of between 10 and 12 million living in an area of 250,000 square kilometres [100,000 square miles], the same size as Great Britain. This gives the jihadis a large pool of potential recruits."

* That figure of 30,000 fighters really representing FOREIGN FIGHTERS having rallied to the ISIL banner alone?

* Given that rule-of-thumb from over one-hundred years ago AT BEST ISIL able to field and support at max an army of about 100,000 troops stretching the population demographic and economic resources to the absolute limit!

VIETNAM DEJA VU REFERS TO THOSE INTELLIGENCE ESTIMATES A SOURCE OF MUCH CONTROVERSY DURING THE SECOND INDO-CHINA WAR.

The beat goes on!