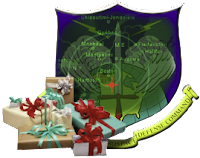 From the Associated Press as seen at CORECOMM.

That AP story copyrighted so where normally I might link that not a good idea.

Rather we refer to the wiki entry the subject North American Defense [NORAD] and the tracking of Santa Claus and his Christmas Eve journey south from the North Pole, courtesy of his sleigh pulled by a team of reindeer. A popular form of entertainment this time of year. Understand as ENTERTAINMENT!

"NORAD Tracks Santa is an annual Christmas-themed entertainment program, which has existed since 1955,[1] produced under the auspices of the North American Aerospace Defense Command (NORAD). Every year on Christmas Eve, 'NORAD Tracks Santa' purports to track Santa Claus as he leaves the North Pole and delivers presents to children around the world."

"The program is in the tradition of the September 1897 editorial 'Yes, Virginia, there is a Santa Claus' in the New York Sun."

Sixty years now NORAD has been tracking Santa Claus [more correctly called Saint Nicholas the real live person from antiquity actually did exist] and it has become an INSTITUTIONALIZED EVENT popular and now even with apps!!

Who would have thought it!!