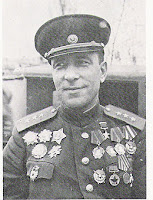 THE PROVERBIAL AND VENERABLE RUSSIAN STEAMROLLER IN ACTION!

RUSSIAN ARTILLERY UNITS IN SYRIA NOT CONFINED TO A SINGLE BATTERY!

Thanks to War is Boring and the tip from Freeper:

"The Russian army is literally bringing its big guns to the war in Syria. U.S. military analysts said the decision to add artillery to the battlefield indicates a number of key developments, including the Kremlin’s growing influence in planning and executing Syrian military operations."

NOT ONLY THE ARTILLERY ITSELF BUT AN ENTIRE DOCTRINE AT WORK!

"In a recent interview on a Russian news program, Konstantin Syvkov said more than 300 artillery pieces concentrated on a half-mile line outside of Hama produced a so-called 'fire wave' that greatly aided the Syrian offensive at first. 'This method consumes a lot of ammunition, but it is very effective in getting through fortifications,' Syvkov said. 'This allowed the breakthrough via the enemy defenses.'”

THE CROSSING OF THE TELTOW CANAL BY THE SOVIET 1ST GUARDS TANK ARMY! PRODIGIOUS AMOUNTS OF ARTILLERY USED IN A PROFLIGATE MANNER!!

Be aware the Soviet and perhaps the modern-day Russian military man counts heavy mortars [greater than 120 mm in size] as ARTILLERY!